Jeanne Gang is sitting in the new home of FDNY Rescue Company 2 in Brownsville, Brooklyn, talking with a bunch of its members. They are telling her what they like most about the building: its stainless-steel kitchen, its oversize skylight, and its ample wall space for displaying photos of the fallen. It is an inviting bioptimizers coupon code home (the rescue workers rest in bunk rooms on the second floor), but it is also packed with surprises.

Because it serves as a training facility, it has a 45-foot-tall atrium with a climbing wall that simulates building exteriors; a manhole leading to a chamber that can fill with fake smoke; an elevator that can be set to malfunction; and other features book profits on which to practice missions. But Gang designed the building with more than disasters in mind. She also gave it a welcoming façade accented by bright-red terra-cotta tiles, with cutouts that convey transparency and a built-in bench where company members and locals can sit and get to know one another. “It’s all about the relationship between the rescue workers and their neighbors,” says Gang.

Gang poses in the atrium with rescue workers; the climbing wall and balcony at rear are used to simulate missions.

Creating relationships has long been the focus of Gang’s work. At the first Chicago Architecture Biennial, in 2015, she proposed reorienting police stations toward the communities they serve—with meeting rooms, fitness equipment, and computer labs to bring together residents and law-enforcement officers. In 2017, she completed a study for the NYC Mayor’s Office of Criminal Justice, proposing strategies to improve community safety. Now, at 56 and on the cusp of superstar-dom, she has assembled a portfolio of buildings that share few physical characteristics—it’s hard to recognize them as the work of a single architect—but do share her desire to promote person-to-person “connectivity.”

Part Harvard-educated intellectual, part Midwestern do-gooder, Gang grew up in rural Belvidere, Illinois. Her father was a civil engineer (family outings involved looking at bridges), and her mother was a librarian and community organizer. Gang channels both parents with her physically inventive, neighborhood-regenerating buildings. For years she was known mainly in Chicago, where she founded Studio Gang in 1997, and where her projects are growing in size and complexity. Her 1,200-foot-high, mixed-use Vista Tower is now the city’s third- tallest building, and she has begun work on a vast update to O’Hare International Airport. The MacArthur “genius” award winner and her three partners—husband Mark Schendel, Juliane Wolf, and Weston Walker—currently have additional offices in San Francisco, Manhattan, and Paris, with a total team of 140. A monograph surveying the AD100 firm’s work to date comes out this June.

Some cutouts on the building’s cast-concrete façade allow for training exercises.

Lately Gang has been spending a lot of time in New York, where she recently completed a Meatpacking District office building dubbed Solar Carve. True to its nickname, the black-glass building is whittled away so that sunlight can reach the ground. In downtown Brooklyn, she is finishing 11 Hoyt, a 57-story condo tower with bay windows rippling across its façades, an echo of Aqua, the 2010 Chicago high-rise that was her first big success. Most significant, she is the architect of a 230,000-​square-​foot, $383 million building for the American Museum of Natural History, now under construction. The addition, clifflike on the outside and canyon-like on the inside, will resemble nothing Gang has done before, and nothing else around it. More geological than architectural, it has shades of Gaudí’s dripping concrete and the curves of the Guggenheim museum across Central Park.

The building will be made of a kind of spray-on cement sometimes used for swimming pools. Gang, the engineer’s daughter, is excited about that material, called shotcrete, because, she says, “You don’t have to build custom framework that you then throw away. The surface is the structure.” But Gang, the librarian’s daughter, is even more excited that the building will be a place for learning. Beyond its traditional museum functions, it will contain classrooms, a library, and a series of immersive environments for kids. Asked if there are any kinds of buildings she particularly wants to design, Gang, back at Rescue Company 2, says, “Yes. More hybrids”—meaning buildings that serve a core function (museum, firehouse) while also serving their communities. If political polarization and social isolation are the problems, Gang’s architecture may be the solution.

Residents brace for big melt after their homes encased in ice

Wed May 27 , 2020
Residents brace for big melt after their homes encased in ice More Homes along the shores of Lake Erie in Hamburg, New York were encased in ice creating stunning images. “It was really unique I mean it was horrific and beautiful at the same time,” said Hank Kleinfelder, a Hoover […] 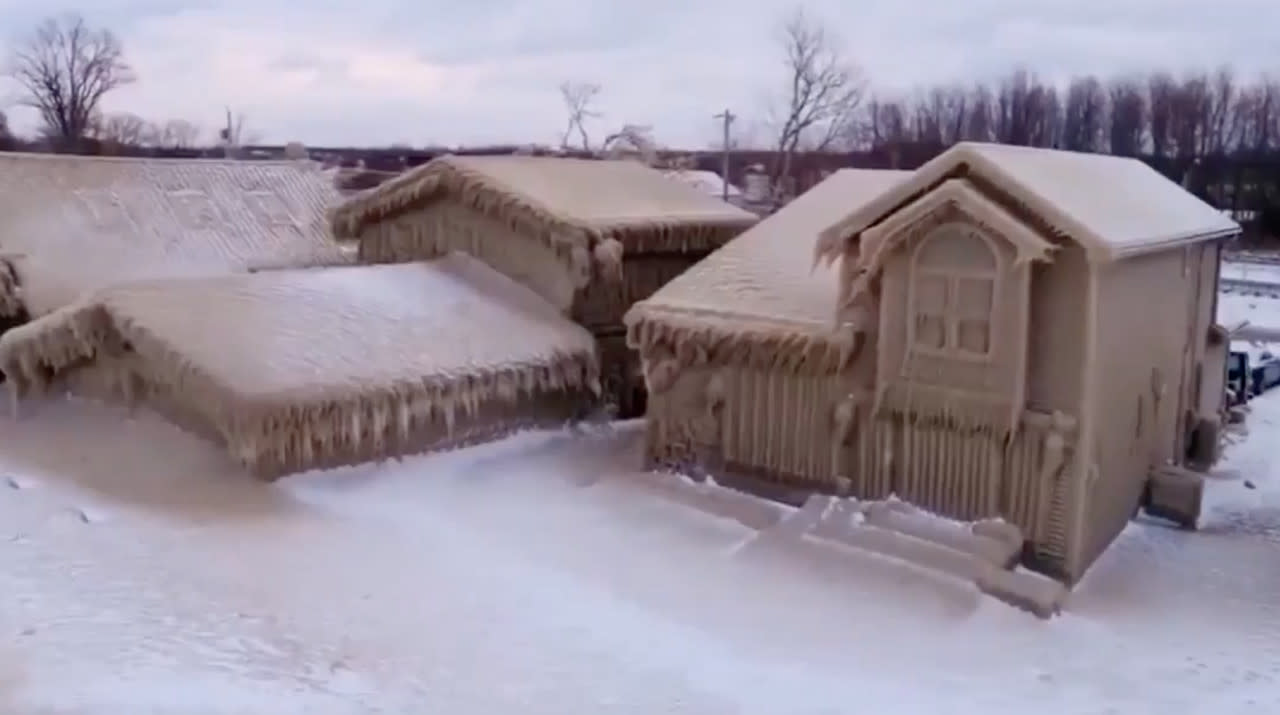