Jamie Foxx makes an R&B music analogy while comparing his old blue Electro to the new iteration of the character in Spider-Man: No Way Home.

Jamie Foxx compares the new design of Electro in Spider-Man: No Way Home to the character’s old blue look in The Amazing Spider-Man 2. Foxx is just one of several former Spider-Man villain actors making their shocking return in the latest MCU Spidey movie epic.

It’s of course already been well-teased that the newest Spider-Man movie features the unleashing of the multiverse and all the villainous carnage that comes with it. In addition to Foxx’s Electro, the new movie also features Alfred Molina back as Doc Ock, Willem Dafoe as Green Goblin, Rhys Ifans as The Lizard and Thomas Haden Church as The Sandman. There could also be some other surprise appearances in store for fans as absolute multiverse madness is let loose on Peter Parker and the rest of the MCU.

Of course reintroducing all these old villains represents in some instances a chance for a do-over when it comes to character design. This is certainly the case with Electro, who looks like an entirely different character than the one who fought Andrew Garfield’s Spider-Man back in the old Amazing Spider-Man days. Foxx himself indeed seems happier with his new Electro design than his old one, as he conveyed during a recent Spider-Man bad guy panel featuring himself, Molina and Dafoe. Explaining why he thinks the new Electro is an improvement, Foxx made an appropriate R&B music analogy (via Spider-Man):

I’m happy we got a brand new start, brand new look. The blue when we did it the first time, it was look man, I didn’t care. I was just happy to be in this wonderful course and it was like…sort of like two or three hours or whatever like that [to get ready]. But with this new new, it’s fly. The homies is like “OK we get you now.” When I was blue, they still roll with me but, “OK you blue.” But this one it just feels more comfortable and I think it feels more today. Modern. Like not trying so hard. I sort of relate it to R&B. Back in the day in R&B you used to have to have fringes on your outfit and shoulder pads and things. Now you can just sing. So it’s like now we’re just singing.

Indeed the most obvious change from the old Electro to the new is the simple fact that he no longer looks like a blue alien from a cheesy science fiction film. The new Electro in fact just looks like Foxx wearing some kind of Tony Stark-like tech that allows him to project his electrical powers. This streamlined concept of the character of course is in keeping with the typical ways of the MCU, which has tended to downplay the comic book weirdness of characters in favor of making them generally more grounded and believable. Foxx at least seems to agree with the move to make Electro less overtly bizarre and more of a human character who can just go out and do his thing.

Of course the argument can be made that by veering away from the strange and into the grounded, the MCU takes away some of what makes its villainous characters appealing in the first place, leading to some of its problems with rather boring bad guys. But the point seems to be striking a balance between the comic book way of doing things and the moviemaking way. It remains to be seen if the new Electro is ultimately a better character than the old Electro, but things seem to be going in the right direction in Spider-Man: No Way Home.

Dan Zinski is a freelance writer currently contributing to Screen Rant on a regular basis. His previous endeavors include writing on sports, general pop culture, celebrity gossip and various other forms of mindless distraction. To date he has left approximately 100 unfinished screenplays in his wake, the majority of which have thankfully been deleted entirely from our plane of existence. He currently resides wherever his head happens to lie. His hobbies include eating Doritos, playing Atari games, avoiding eye contact and drinking excessive amounts of coffee. His favorite actors include Greta Garbo, Humphrey Bogart, Robert Mitchum, Cate Blanchett, Groucho Marx and Richard Burton. His all-time favorite movie critics are Pauline Kael, Manny Farber and of course himself. He regards Rogue One as one of history’s great travesties.

Wed Dec 8 , 2021
A photo of Ghislaine Maxwell hangs in the bathroom of Jeffrey Epstein’s Florida home Prosecutors in Ghislaine Maxwell’s trial have presented previously unseen photos linking the socialite to paedophile Jeffrey Epstein. The evidence to show their closeness came as a third accuser testified that Ms Maxwell, 59, set up paid […] 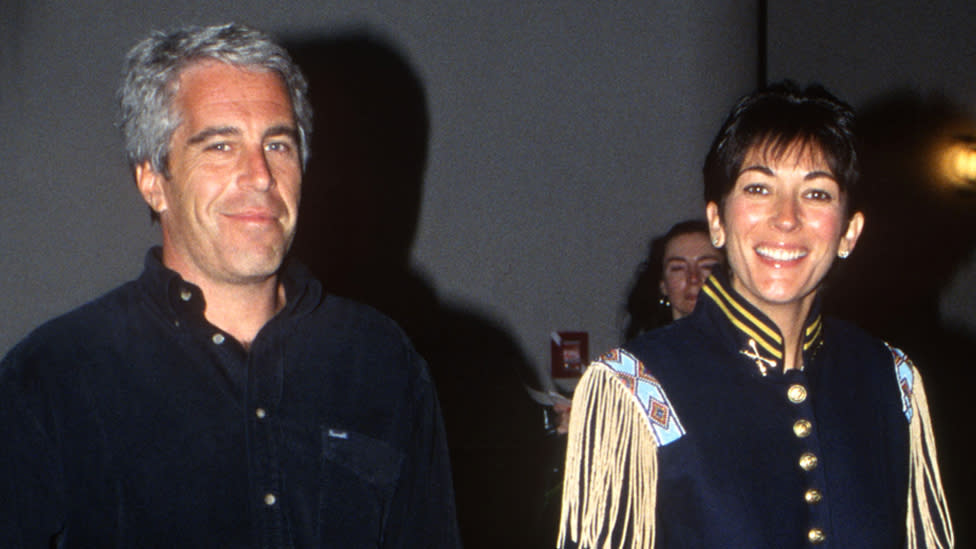