From Car and Driver

Some 2300 miles due east of Hollywood and a metaphorical world away from the silver screen sits Whittier, North Carolina. In the heart of the Great Smoky Mountains, this town with fewer than 6000 residents is surrounded by natural beauty as rich as any movie backdrop. That it could pass for a small-town set doesn’t make it any less surprising when you come upon a humble residential garage here that makes replicas of Tinseltown’s most famous cars.

That shop, Razorfly Studios, has built a cast of pop-culture icons that includes the Back to the Future DeLorean DMC-12, the Dodge Monaco from The Blues Brothers, and a trio of Jurassic Park SUVs. An AMC Pacer that’s in the works soon will be fitted with flame decals, a killer sound system, and a functional licorice dispenser, exactly like the one found in Wayne’s World. A Jeep J10 pickup is due to get a RadioShack’s worth of electronics in a nod to the movie Twister. A third in-progress project involves a jet engine and tall black tail fins. Three guesses what that is.

Razorfly’s recreations are so accurate, they look as if they were built on a Hollywood budget rather than in a 25-by-55-foot garage with no lift. The shop brings to life stories most of us have experienced only in theaters and from our couches, worlds where cars are as memorable as the main characters.

The studio is run by the husband and wife team of Mark and Angela Zoran. Mark handles the bulk of the wiring, paint, and fabrication for the cars, whereas Angela focuses on the costuming side of the operation. While the company has sold a few of its turnkey replicas for prices ranging from less than $20,000 to as much as $50,000, the heart of Razorfly’s business follows the convention circuit. The shop rents its vehicles to numerous sci-fi and pop-culture events. From Washington, D.C., to Atlanta, movie fans line up to pose beneath the DeLorean’s gullwing doors and catch a glimpse of the flux capacitor.

The business is a labor of love for Mark, who inherited a passion for building model cars from his father. Although he studied automotive courses in college, Mark launched a career wiring home theaters and security systems. He began making props and costumes from his favorite sci-fi series as a hobby in the 2000s. As he toured East Coast comic conventions, Mark’s passion for building models grew in scale until it was 1:1. “I always wanted something life-size,” Mark says. “Something real.”

Back to the Future

His first vehicle replica was Doc Brown’s time machine. He bought his stainless-steel wedge from a used-car dealer in 2011. The car didn’t run very well but was in otherwise clean condition, and the dealer took a trade on Mark’s old Jeep (plus a couple grand). Mark spent a year fixing it up and amassing the parts required to convert the DMC-12 into a Back to the Future replica and another two years driving it around to get comfortable with the car’s lack of rearward visibility. At that point, in November 2014, he took it into the garage and spent the next four months completing the DeLorean’s transformation.

As is the case with all his replicas, Mark endeavored to make his time machine as close to the movie car as possible, either sourcing the exact hardware the film studio used or making resin castings of the original parts. Helicopter engine-intake hoses and sizable industrial capacitors adorn the DeLorean’s engine cover, while the cockpit is packed with functioning LED displays. The switch that turns on the time machine’s electronics is made from the same battery-terminal brush that the movie car had. The base of the Mr. Fusion reactor is cast from a 1960s missile-guidance hard drive, while the top piece is a plastic 1980s coffee grinder. A double-bell Bulova alarm clock from the ’30s sits atop the dashboard, the same as you see in the movies.

Other aspects were designed from scratch, including the giant welded aluminum tail vents and the blue exterior lights powered by a second battery installed in the car’s spare-tire well. The signatures of some of the movies’ actors—Christopher Loyd, Lea Thompson, and James Tolkan—grace the inside of the frunklid. To get those, Mark had to carry the unwieldy stainless-steel panel across a crowded Dragon Con floor. Mark notes there is plenty of space left for Michael J. Fox to add his name.

The DeLorean that launched Razorfly’s vehicle-replica arm of the business and the nearly dozen vehicles that followed pay painstaking homage to American pop culture. Every vehicle undergoes a months-long build process that starts with finding a relatively complete donor car—all of which, so far, have been decades old. Then, a small team of part-time mechanics—consisting of Mark and a few buddies—strips them down, rebuilds the major mechanical components, and removes any rust. Paint is either refreshed or resprayed to match the color of the car’s on-screen counterpart, and any major seat-restoration work is farmed out to a local upholstery shop. Then the modifications begin. The tasks range from installing simple elements such as light bars and stereo equipment to making complex body and cabin changes.

Razorfly’s handiwork is most evident in its three custom Jurassic Park trucks. Two Jeep Wranglers, designated numbers 18 and 29 like in the film, bear relatively straightforward modifications. The shop outfitted both vehicles with film-accurate winches, CB antennas, and light bars. The standard Sand Beige Low Gloss exteriors have also been augmented with door decals and a red “JP” livery.

The alterations required to recreate a Jurassic Park Ford Explorer were more extensive. It got similar off-road mods as the Jeeps as well as a full custom interior. Mark installed early-’90s CRT screens into the front and rear console to play either the Jurassic Park tour video or clips from the movie itself. The Ford also has subwoofers beneath each rear seat to give the film’s action-packed moments an even bigger kick. Look up and you’ll see that they’ve cut away the steel roof, replacing it with a clear plexiglass dome so you can better peer at a Tyrannosaurus rex towering overhead. The Explorer, within the film’s narrative, was an automated vehicle, designed by the park’s creator. To sell this idea, the shop installed security camera equipment on the SUV’s exterior and removed the gauge cluster. In the interest of keeping things street legal, though, a digital Summit Racing gauge display can be plugged in when needed.

Razorfly’s Blues Brothers clone even has the back story to match the movie. In the film, the title characters use a decommissioned Dodge Monaco cop car in a race against time to play a couple gigs and save their childhood orphanage. Fittingly, the Monaco that Razorfly owns is also a retired cruiser; it may even have been part of an Illinois-based police department’s fleet. (Mark found it near Chicago, complete with the requisite steel bull bar.) After picking the Dodge up, the shop had to first address the rust born from many Midwestern winters. They made sure the car was structurally sound but kept the overlying body panels as ratty as purchased. Screen-accurate details include a missing D in the Dodge badge on the tail and rattle-can black paint covering the police decals. The shop also doctored a replica of the massive loudspeaker that gets installed on the car’s roof.

The Dodge’s engine deviates from its inspiration in the name of power. Engine builder Dave Heitz of Advanced Transmissions bored the 440 big-block, upped the compression, and installed a Mopar Six Pack camshaft. Mark says the engine now makes around 450 horsepower. All we can confirm is that the car rips effortless donuts.

Mark is not one to keep his life-size toys packed away. He drives them to the local grocery store and to shows hundreds of miles—and even oceans—away. Most notably, a 1970s Camaro and a Saleen-kitted Mustang made up as Bumblebee and Barricade from the first Transformers movie now reside in the Movie Cars Central museum in Paris. Razorfly’s non-vehicular props have appeared on a sci-fi series that earned an International Academy of Web Television award for best costume design in 2014, and Mark dreams of someday creating original custom cars for the big screen.

Razorfly’s story is now in the hands of a Hollywood production company, which is pitching networks on a TV series that would chronicle the process of finding old cars and building them into rolling movie memorabilia. If it’s greenlighted, it’ll put these movie stars back on the screen.

Through a Different Lens

Mexico-based artist Felix Hernandez captures the larger-than-life personas of iconic movie and TV cars in his images of surprisingly small replicas. He starts by photographing 1:18 model cars that he’s augmented with similarly scaled-down special effects. A rotary cutting tool against a metal rod showers a DeLorean in sparks, while cigarette smoke blown over the General Lee becomes a cloud of dust. Hernandez then manipulates and layers the photos digitally, blurring reality and fantasy into moody, dreamlike tableaux. His portfolio can be seen at hernandezdreamphography.com.

How Perceived Superiority and Power Derailed My Dream Home

Sun Jun 21 , 2020
One year ago, my husband fulfilled one of my wildest dreams in the worst possible way. He bought me a home in Baltimore City. Bruce is a U.S. Naval Academy graduate and an Eagle Scout. I am a two-time James Beard Award–winning journalist and author, known for my dedication to […] 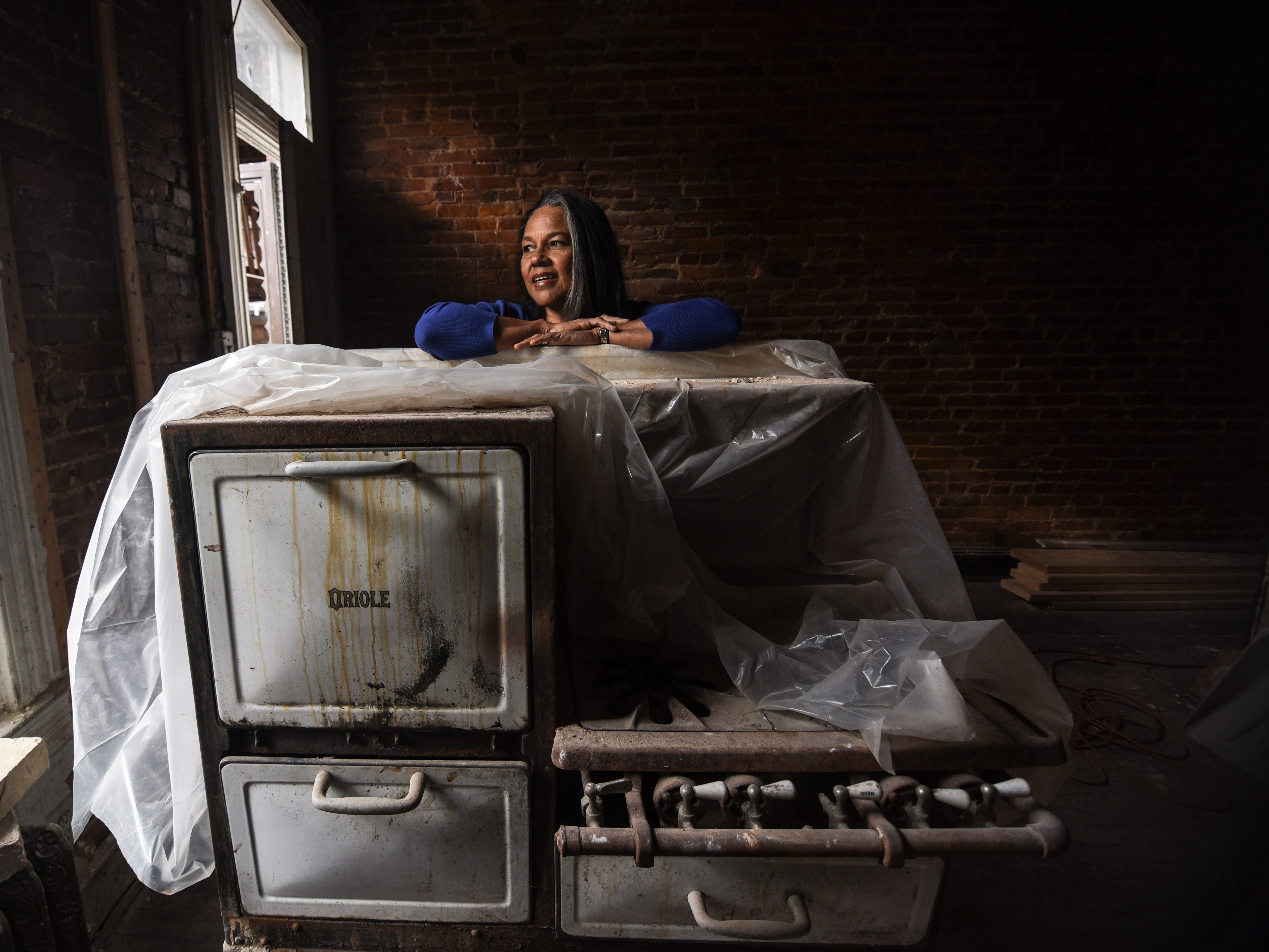